Vote on TWC for a sneak peek preview!

Guilds dominate industry and commerce in Sherbourg and do so through royal decree. Since the founding of Aradie, the Kings of Saronne have granted the Office of the Governor General the right to decide who can practice a trade in the colony. Beginning with Jaquet d'Artais, the Governors General have issued Letters Patent to a group or an individual in return for an annual stipend. These letters grant the right to form a guild and acquire a monopoly for a particular aspect of commerce. Anyone who wishes to practice that trade must belong to the guild or be subject to fines, forfeitures, arrest, and even expulsion from the colony.

The only threat to the guild's monopoly is that the Governor General could issue Letters Patent to a rival group if the annual stipend is not paid or a rival group outbids the guild. This happened quite frequently in the early days of the colony, especially among the merchants and the leatherworkers. This activity has died down in recent years as the guilds allowed more members into their ranks and swelled their coffers with emergency stipend supplements in case of a challenge before the Governor General.

Sherbourg currently boasts twelve guilds that control most every aspect of commerce in the city. The Crown requires each of these guilds to have a marque (a symbol) that every member must display prominently on their place of business. This has led to the custom of double-signs on many of the buildings in the city. The higher sign shows guild marque, while the lower displays the guilder's business name.

This guild is a catchall in Sherbourg as it encompasses crafters whose trades are not covered by another guild. The league has a wide variety of members, which include glassblowers, chandlers, potters, basketmakers, netmakers, ropemakers, and apothecaries. This jumbled grab-bag of professions gives the league a poor reputation in the city, and the other guilds dismiss it as ex miscellanea. In particular, the apothecaries have a prolonged feud with the alchemists of the Order of the Erudite, which sporadically flares into violence or vandalism. The marque of the Artisans' League is a silhouette of a hand with an arcing line that extends from the tip of the thumb around the fingers to the tip of the little finger.

This guild is a union of all who craft fine metals and gems in the city. This is a tiny guild with a very rigid pecking order: pewtersmiths at the bottom, then silversmiths, goldsmiths, and jewelers at the top (of which there is only one in town). With the exception of the pewtersmiths, the Blazoners are extremely wealthy. The guild is a prominent patron of the arts and pays for musical acts to visit the city from Japethe. Its wealth makes its members a target for many thieves in town, so their properties are heavily guarded and often trapped. The guild's marque is a chalice set with gems.

This guild includes all who work with the skin of animals, such as tanners, beltmakers, cobblers, and the makers of saddles and tack. The Fellowship does not include the trappers and fur traders. The Aradie Trading Company has fought that successfully, keeping the fur trade out of the hands of this guild. The rivalry for the leatherworkers' Letters Patent is particularly fierce and the guild leadership has changed hands frequently over the decades as different coalitions outbid each other. In the past, the name of the guild holding the leatherworkers' Letters Patent included the League of Skin, the Leather Guild, and the Hidebound. The Fellowship's marque is a stretched skin on a frame. Older marques from past iterations of this guild have been a strip of coiled leather, a stack of hides, and a skinned cow wearing a barrel.

The Fellowship of Smiths is the guild for all those who work with base metal. Their ranks include blacksmiths, armorers, cutlers, bladesmiths, and gunsmiths. They are a large guild with members in every village in the colony. The Fellowship of Smiths has had some of the least internal feuding of any of the guilds, with their Letters Patent never changing hands once. The smiths take the word "fellowship" in their guild title seriously and provide support and charity to its members. Their jealousy of the Blazoners' Guild is known throughout the city, with the smiths making rude comments and singing bawdy songs at civic events toward the upscale Blazoners. The guild's marque is a hammer and anvil. Nothing fancy, as the smiths would say, but it gets the job done. 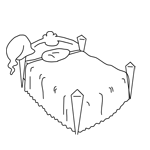 This guild's Letters Patent covers all who provide services for the comfort of others. Guild membership includes auberges, hostels, bordels, barbers, dentists, and physicians. The inclusion of the bordels in the guild created some controversy, but the dispute was resolved in 1654 when the bordels agreed to pay twice the standard dues rate. The sheer number of bordels in the city allowed Marie-Hélène Beaugrand, madame of the Golden Pearl, to be elected guildmaster in 1678. (A second vote rejected changing the title of the office to guildmistress for fear of jokes.)

The guild's marque changes often as different guildmasters come to the fore. In the past it has been an elaborately decorated pillow, a hammock, and a fellow sleeping in a chair beside the fire. Currently, it is a bed with a nightcap. Under the most recent guildmaster, vandals commonly change the nightcap to a lady's undergarment.

The Masons' Guild encompasses all who work with stone. This includes stonemasons, stonecutters, sculptors, quarriers, and engineers. The honorary head of the guild is the Architect of the City, but its day-to-day dealings are handled by the masons themselves. In the past generation, the masons' guild has come to represent the interests of the miners, who had previously been at the mercy of the Aradie Trading Company. The rumor in town is that the masons did this at the request of Governor General de Carailles who has had a running spat with the company ever since he was appointed. The guild's marque combines a square, level, plumb, ruler, hammer, trowel, and compass, making it the most complicated of all the guild marques. The masons would have it no other way.

The Mercers' Consortium is an organization of those who buy and sell, but do not make things. They tend to be some of the richest individuals in town as wealth makes more wealth. Members include merchants, bankers, fur traders, and pawnshops. The Governor General included the pawnshops in the Letters Patent to the chagrin of the rest of the consortium who do their best to ignore them. The consortium is respected in Sherbourg but not well liked. Many bonhommes believe that the merchants of the guild lie and cheat them at every opportunity. A popular joke currently making its rounds is: "Why is the shirt of a banker the best gendarme in town? It has a thief by the neck every day." The marque of the Mercers' Consortium is a set of weighing scales. Critics point out that even in their marque the scales aren't even.

Order of the Erudite

The Order of the Erudite is an assembly of those who deal in words and philosophy as a trade. This includes the scribes, clerks, pleaders, printers, and alchemists. The Erudite is one of the smallest guilds in Sherbourg but also one of the wealthiest, ranking with the Blazoners' Guild. The guild fees for the Erudite are enormous, but the amenities offered at the guild hall are some of the finest in the city. Many outsiders find this guild's name (and its members) pretentious and call both the guild and its hall the Thinkers' Club. The marque of the Erudite is a quill dripping with ink (or blood as some people joke about the pleaders and the alchemists). To avoid this allusion, some alchemists use the elemental symbol for aether rather than the guild marque. 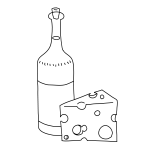 This guild encompasses all those who provide food and spirits. The guild includes saloons, taverns, bakers, butchers, salters, brewers, vintners, and distillers. Even street vendors, such as the oyster carts that roam the streets of Sherbourg, must belong to the guild in order to hawk their wares. By the wording of the Letter Patent, no member of the Victualers' Guild can offer lodging - that right belongs to the Hostelers' Guild. Similarly, the Hostelers' Guild cannot offer food, creating a stark division between tavern and inn. The marque of the Victualers' is a wine bottle and a block of cheese.

The Woodworkers' Guild holds the Letters Patent for all who fashion items from wood. Examples include carpenters, wainwrights, coopers, roofers, and woodcarvers. Members of the guild have long claimed that the town is cursed with fires that catch too easily to be natural. A few woodworkers have claimed to have seen fires crawl across the floor, seeking new fuel to consume, much like the legendary salamanders. While fires are all too common in the history of the city, the other residents of Sherbourg believe that these visions are a side effect of working with too much varnish. The marque of the Woodworkers' Guild is a woodworker's plane with a curling wood shaving on top.

« Return to the Almanac Index
© 2010- Mythmakers LLC • Terms • Privacy
Snow by Night is a registered trademark of Mythmakers LLC.